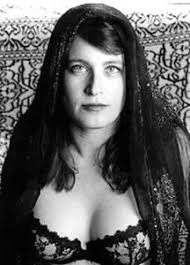 Susie Bright received a lot (and I mean A LOT) of toys from Babeland for our 15th anniversary. It sounds like receiving the box prompted some reflections on Babeland memories from the past:

I have so many great Babeland memories, since the first time I visited their store in New York (the one with the trap door in the floor on Rivington Street!) and then in Seattle? best discussion with customers about fistfucking I've ever had anywhere.

Who can forget the time Joan Jett came into the store when I was autographing Nothing But the Girl, and shyly told us how proud she was of her lover's beautiful photography inside the book.

And then there were the sex toys:

I thought that when Babeland said "celebrate," they meant we were going to have a party. Yes, they did mean party? at my house. A box the size of a refrigerator arrived at my doorstep the next day, packed with the Babeland cognesciti's Top 15 sex toys.

Wow. It will take me months to get around to all of these properly. I called over a few friends who I figured would appreciate an intervention.

So far in my "celebration," I've discovered two new-ish items that are as essential as they are dear. You have to think of them like paying for a pair of prescription glasses? since you use them every day, it's pennies per diem of necessity.

One is something called a "Maven Sleeve," which is marketed to men. It's a 3/8" thick blue sleeve, like a sleek, stretching cock sock.

I couldn't keep my hands off it.

It is so soft, cockhead soft. The color is sapphire blue, a hypnotic aspect I didn't see coming.

When I asked one of my friends if we could "try it on" his erection, I realized my color sensitivity was� engrained from childhood memories? my parents lived in India in the 1950s, and as a child, our apartment was filled with images of Hindu deities.

Inside the Maven blue sleeve, my friend looked like Krishna.

Enormous blue Krishna cock? it's the prettiest ever!� Although I'm sure my pal would've liked some privacy to investigate the Maven's mastabatory potential, I was seized with the sadistic desire to control the thing entirely. This Sleeve inspires manhandling. And yes, you have to use lube inside of it, or you'll kill someone. (But what a way to go!)

The second toy I tried that made me want to shut the door for a week was something unimaginatively titled: The Pure Wand.

, cosmic curving hook to your 6th Chakra... do you see a theme here? The weight and angle of this toy would wake a G-Spot up from a thousand year's sleep.

$5 Off Your Next Order

Receive $5 off your next order
when you join our email list
We value your privacy. Your information will not be shared or sold.